Jesus Goes Back to Heaven

Jesus Goes Back to Heaven 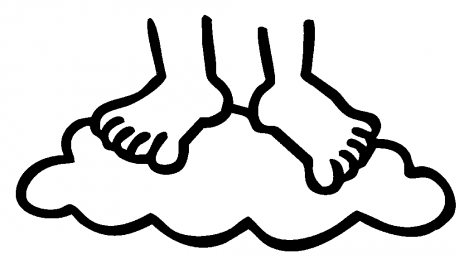 Scripture
Matthew 28:16-20; Acts 1:1-11
Focus
Our risen Lord Jesus ascended to heaven and he is still with us today.
Faith Nurture Goals

As we begin a unit that focuses on the life of the early church as pictured in the book of Acts, it's a good idea to pay some close attention to the introduction that Luke writes to his friend Theophilus:

- "all that Jesus began to do and to teach" (notice the word *began*, since Luke now intends to continue to tell about what Jesus is doing and teaching)

- "until the day he was taken up to heaven" (even though Jesus physically leaves, he continues to lead and guide his church)

Acts isn't merely a history of the early church, it's about what the ascended Lord Jesus Christ is continuing to do as he builds his church. In Acts, the primary actor is the Holy Spirit sent by Jesus, who empowers his disciples to bring the gospel to the ends of the earth.

As you read the story of Jesus' ascension, the disciples appear to be agitated and full of questions, while Jesus is serene, speaking with absolute authority and confidence. He points to a new future in which the disciples will have a huge and important calling---to disciple the nations.

"You will be my witnesses in Jerusalem, and in all Judea and Samaria, and to the ends of the earth" (Acts 1:8). That's not merely a geography lesson; it forms the outline of the book of Acts. It's fascinating to see how the little church, sometimes because of persecution, moves from Jerusalem up into Samaria, and before it's over, all the way to Rome. But in this outline we also see the church's mission today. It starts at home and then spreads into adjacent but somewhat unfamiliar territory---and eventually to the whole wide world.

It has little to do with the disciples' power or ingenuity. It's all about the Holy Spirit. Interestingly, while Jesus tells them to "go" in Matthew 28, in Acts 1 the command is "wait." The prayerful waiting on the Spirit emphasizes that this is a Spirit-led, Spirit-empowered movement. We will see hints of that all the way through.

The story of the ascension is strangely austere---just one sentence. There are no descriptive adjectives, no recorded reactions, and certainly no grieving. And there's no attempt to explain its meaning apart from the few cryptic words of the "men in white."

Still, that one sentence is dense with meaningful hints. Jesus goes up, but he does not ascend like a rocket until he fades from view: "A cloud hid him from their sight." In the Bible, Old and New Testament alike, clouds always evoke God's presence: the pillar of cloud, the *shekinah* cloud that descended in the temple, and the cloud that enveloped Jesus and the disciples at his transfiguration. Here too, the cloud that receives Jesus is a sign of divine presence. Maybe God's heavenly dwelling isn't so far away, in outer space, but closer than we think---another dimension of reality we cannot see.

In Matthew 28, Jesus promises to be with us always, but in Acts 1 he leaves. Jesus' presence with us today is not like when he was on earth. It's a presence we may experience very deeply and truly, but it comes by faith, not by sight. Jesus has sent his Spirit to live in our hearts. One thing the disciples never doubted from that day on was that Jesus was leading the way to the future.