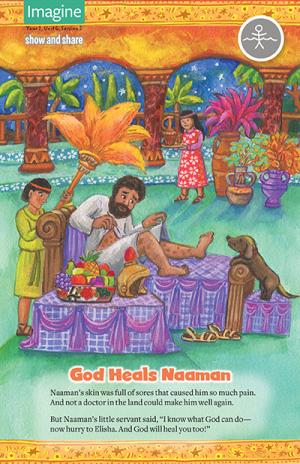 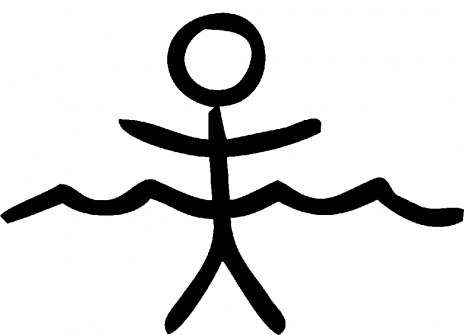 It's no wonder this is one of the better-loved stories in the Old Testament. It's got everything you could want---interesting characters, drama, mystery, irony, and a touch of humor.

Naaman was a great general in the army of the king of Aram, a land to the north, but he was afflicted with leprosy. Significantly, the Bible tells us that his success in battle against Israel was given to him by the Lord, but it says nothing of his leprosy. We encounter Naaman not on the battlefield but at home, where a Hebrew slave girl serving his wife takes pity on the great man. How ironic that a slave girl, separated from her land and family by this general, should act to help him, and that the cure is to be found in the land he conquered.

Elisha, "the man of God," hears the commotion and instructs the king to send Naaman to him. So Naaman, along with his entire entourage of horses and chariots and soldiers, arrives at Elisha's front door. Instead of going out himself to meet this visiting dignitary, Elisha sends a servant to meet him with a message: "Go, wash yourself seven times in the Jordan, and your flesh will be restored."

Naaman stalks away in a rage. He had imagined exactly how it would take place, with laying on of hands while invoking the God of Israel. Instead he's supposed to wash himself in that muddy stream called the Jordan. It's only when his servants (again) calm him down that he does what Elisha had told him to do---and he's cured!

Again Naaman shows up at Elisha's door, now in gratitude. He wants to give Elisha a gift. Elisha refuses the offer, but then Naaman makes a strange request. He asks Elisha for some dirt from the land of Israel to take back with him (to make an altar?) and vows that from now on he will offer sacrifices only to the God of Israel---with one strange and humorous exception. When he's with the king of Aram at the temple of Rimmon, he will at least bow a little bit with the king. For this he asks in advance for forgiveness, which Elisha grants, telling this man of war to "go in peace."

There's another ending to the story having to do with Elisha's greedy servant (vv. 19-27), which you might also want to read.

Jesus himself refers to this story in Luke 4. The Pharisees taunt him to do his miracles on demand, but Jesus replies, "No prophet is accepted in his hometown" (v. 24). He then recalls a story of Elijah and then the story in which Elisha heals Naaman. "There were many in Israel with leprosy . . . yet not one of them was cleansed---only Naaman the Syrian" (v.27). As often happens in the Bible, insiders end up outside, and outsiders inside, and all the power belongs to God.

Before kids arrive, give some thought to someone they might know who is in need of God’s healing today: one of their family members, someone in your congregation, or perhaps even one of the little ones in your group. If possible, bring a picture or think of some other way to introduce that person to the children.