Jesus and a Thankful Man

Jesus and a Thankful Man 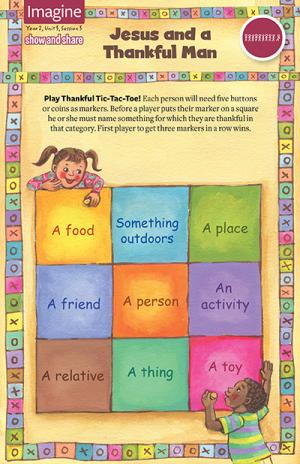 This is a story that can be peeled back in layers, each one giving a different slant.

Notice, first, that Jesus is on the "border." It was characteristic of Jesus to be a border dweller, on the dividing line between Jew and Samaritan, the "good people" and the sinners, the sick and the healthy, the clean and the unclean.

Ten men with leprosy appear and appeal to Jesus for help. As many Bibles note, it was not necessarily leprosy at all, but could have been almost any kind of skin disease. The law of Moses stipulated the skin conditions rendered a person ritually unclean, and anyone who contacted them would become ritually unclean as well. Ritual uncleanliness meant that the person was thrust out of the religious community, usually forming their own small community, like these ten men.

So, they kept their distance from Jesus too, shouting at him to have mercy from afar. (In fact, we learn in Mark 1:41 that Jesus did touch a man with leprosy.) But in this case, Jesus merely told them to go to the priest. This was so that the priest could certify that they were clean, and therefore fit to rejoin society.

It must have taken some faith for them to do that, because the actual healing didn't take place until they were on their way to the priest. At some point along the way, obeying Jesus' command, they saw that they were healed. When they got there, they were given a clean bill of health. How glad they must have been, after years of being ostracized.

All except one. One man, as soon as he noticed that he was healed, and before even going to the priest, turned right around to go back to Jesus to thank him. He didn't just thank him; he adoringly threw himself at Jesus' feet. He was overwhelmed with gratitude. And then Luke unloads the kicker: he was a Samaritan.

As you may realize, Samaritans were "mixed breed" people, a mixture of Jews who remained after the Assyrian conquest of the northern kingdom of Israel and the people who had been forced to relocate there from who knows where. And it was mixed religion they practiced, importing elements of pagan practices with Jewish religion. The Jews despised them.

But he's the one who comes back to thank Jesus so profusely. So, Jesus wonders out loud, "where are the others?" Isn't it remarkable that this foreigner is the only one whose heart is filled with gratitude, the only one to acknowledge that Jesus is the source of their healing?

"Rise and go; your faith has made you well." Jesus is saying that this was more than a faith healing. He was already healed before he ever returned to Jesus. The word translated "well" means whole, full, complete. While all ten were physically healed, only this man, expressing his overwhelming gratitude, was truly transformed. He was healed body and soul.

Gratitude is deeply important. When we are grateful, we know that our lives depend on the generosity and goodwill of others. And when we are truly grateful to God, we understand that we depend on him for everything we are and have.

Grace is like an electrical circuit. God gives it freely, but it's only when the grace, the healing, the forgiveness, is returned in grateful living, that it truly transforms our lives.