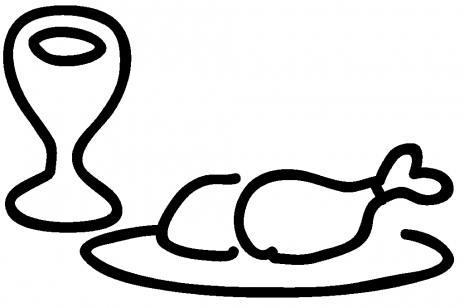 Lots of the stories about Jesus, as well as several of the stories that Jesus told, take place around the dinner table. This shouldn't surprise us, since eating and table fellowship are a central part of our lives too. As he tells this parable, Jesus is the invited guest at a dinner party given by a prominent Pharisee, and he doesn't hesitate to tell his host about the banquet of God's kingdom.

In this parable, a great banquet has been planned for a long time; the invitations have been sent out, and now, in the absence of RSVPs, the host dispatches his servant to notify the guests once more. But at the last minute the invited guests give seemingly legitimate but unrealistic excuses for not planning to attend. The excuses just don't stand up to scrutiny.

Naturally, the host is very angry; his long-planned dinner party is about to flop. But this host determines that there will be a party. Accordingly, he sends his servant out into the streets and back alleys to invite those who are poor, crippled, blind, and otherwise disabled or disadvantaged to come to his house for the banquet.

So, while all his rich and respectable neighbors have politely declined his invitation and stayed home, the host begins to fill the banquet hall with the least likely of guests. Hobbling on crutches or feeling their way with canes, with many looking hungry, ill-at-ease, and unkempt, the rag-tag crowd wanders wide-eyed into the great hall. But it's still not full, so the host sends his servants out onto the country lanes and byways to gather in anyone else who might still be willing to come.

This is what the kingdom of God is like, Jesus declares. Of course, he's describing exactly what has been happening all throughout his ministry. The wealthy and respectable, the religious leaders, the ones who should have known, have been turning away from Jesus and his message. Tax collectors and "sinners," the poor and the prostitutes, the sick and the demon-possessed all come clamoring to Jesus, stirred to action by his words of welcome and hope. When the invited guests, the Jewish leaders, reject the invitation, this motley host will fill the hall to overflowing.

What does this say about the kingdom? To begin with, those who enter can come only by invitation---an invitation in no way earned or deserved on the basis of anything they've done. Entrance into the kingdom does not depend on human status but on a willing response; it depends on grace, not merit. The story also reveals to us that God's kingdom is a topsy-turvy, upside-down affair. The insiders end up being outsiders, and the outsiders throng in. The sleek and the successful refuse the invitation, while the least, the last, and the lost come gladly to the party.