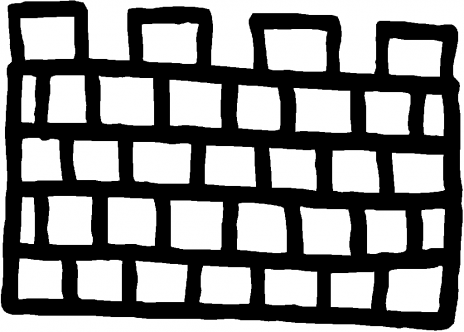 As we move further along in the story of Israel's return from exile to the promised land, we gain another perspective from the book of Nehemiah. In the absence of most of the Israelite people, others had taken over the land surrounding Jerusalem. We can understand that these returning people, with their claim to the land, would not be welcome. There was strong opposition.

Enter Nehemiah. He was another of those remarkable Jews like Daniel and Esther, who rose to prominence in the courts of the kings of Babylon and Persia. Some of Nehemiah's relatives reported on the slow progress and the opposition they were encountering to rebuilding Jerusalem, and Nehemiah, sad and weeping, felt a strong call to do something for his people. But instead of acting too hastily, he prayed a beautiful prayer (1:5-11), confessing Israel's sin and the justice of the exile, and thanking God for returning his people to their land. He also asked that God would guide him in helping them.

One day, as Nehemiah went about his duties as royal cupbearer, the king wondered why his servant, normally so cheerful, was so sad. Here was an opening for Nehemiah to talk about the plight of his people, and he fearfully leaped in. He told the king about the conditions in Jerusalem. When the king asked what Nehemiah wanted to do about it, he asked for a leave of absence to go and help his people (a kind of Old Testament mission trip). Nehemiah received a safe-conduct pass for his travel, as well as a gift of some rebuilding materials.

When Nehemiah arrived, he didn't immediately announce who he was and why he was there. Instead, after three days, he took a tour around the walls of the city at night, so as not to awaken any attention. He found the conditions deplorable, and when he returned he spoke with the leaders and gave them his honest assessment. Then he said, "Come, let us rebuild the walls of Jerusalem, and we will no longer be in disgrace." Then he told them about God's leading and the blessing of the king on the project. In those days, a city without walls was no real city at all, so the rebuilding of its walls not only served as protection, but as a symbol of Jerusalem's proud history and identity.

Sanballat and Tobiah were dead set against the building program. They had evidently accumulated some power over the city during the exile and didn't want to see it slip through their fingers. They ridiculed the project and suggested that those who participated were rebelling against the king. Nehemiah gave them this stirring response: "The God of heaven will give us success. We, his servants, will start rebuilding, but as for you, you have no share in Jerusalem or any claim or historic right."

As expected, the opposition began almost immediately. Nehemiah's arrival as the governor of Jerusalem (Neh. 5:14) and the armed escorts for the builders threatened the governors in the surrounding area. They couldn't simply attack, of course, because of Nehemiah's approval by the king, so they attempted to threaten and ridicule the builders.

Nehemiah's genius was that he kept the people's attention on the job ahead and the glory of God. But Nehemiah also made sure that they had protection. He ordered them to build with a trowel in one hand and a sword in the other. And, since the work was so spread out, he set up an alarm system, so that if there were trouble in one area, the workers would stop and rush to protect that place.

Nehemiah also paid attention to the welfare of the people within the city, many of whom were very poor. He found out that some of the people were "loan sharking" the poor by selling land to their enemies and lending money to their own people at exorbitant interest rates. Nehemiah ordered them to stop this practice, and the people complied. Note how Nehemiah addresses his writing as a kind of report to the Lord: "Remember me with favor, O God, for all I have done for these people" (5:19).

All through this time not only the builders were threatened, but also Nehemiah himself. At one point the enemies tried to lure Nehemiah outside the walls for a "conference," but Nehemiah saw through the ruse and refused to come. The work was completed in a remarkable fifty-two days. Nehemiah was in a hurry not only because of the opposition, but also because of his promise to return to the king.

When the enemies saw what had been done in so little time, they were "afraid and lost their self-confidence, because they realized that this work had been done with the help of our God" (6:16).

Finally, the moment came for rededicating the walls of the city. Nehemiah arranged for a great celebration, with sacrifices of thanksgiving. The venerable priest Ezra, who had led a previous group of returnees, stood on a great wooden platform and read the "book of the law of Moses," Israel's constitution. While Ezra read, other Levites explained the meaning of the readings to the people. The people were deeply moved and wept at hearing and understanding the law, which had not been heard for so long. Nehemiah and the other leaders told them not to weep and mourn, but rather to celebrate. "This day is holy to our Lord. Do not grieve, for the joy of the Lord is your strength" (9:10).

This celebration and the ceremony of reading the law went on for seven days. On the eighth day, it was time for the people to turn from their joyful exuberance to confession. At a great assembly the priests and Levites led the people in a prayer of praise and confession (9:5-37). The prayer rehearsed all the blessings of God and the sinful disobedience of the people of Israel through the years. Finally the leaders pleaded that God would remember his covenant mercy and deliver Israel from bondage once more. In his final days among them, Nehemiah worked to enforce the keeping of God's law in such matters as justice for the poor, keeping the Sabbath, and marrying foreign wives. His report closed with his final plea to God, "Remember me with your favor, my God."