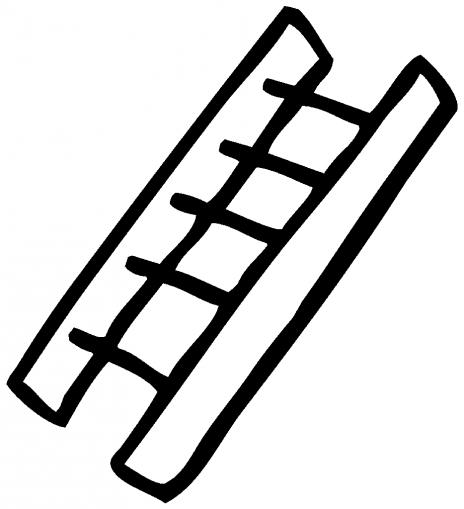 At first glance, the story of Jacob's dream may seem an odd complement to Q&A 25 and 26. What does Jacob's vision of the ladder between heaven and earth have to do with Jesus' birth and his role as the "go-between" or mediator?

When Jacob arrived in Bethel (which means "house of God"), he was a young man in deep trouble. Away from home for the first time, fearful of his brother Esau's fierce anger, Jacob's future seemed pretty shaky. He worried that by tricking his father he may have given up God's favor. The future seemed bleak.

Sleeping with a stone for his pillow, Jacob had a dream in which he saw a stairway or ladder stretching from earth to heaven. (The "ladder" may actually have been an ancient ziggurat which, like the Tower of Babel, was meant to connect heaven with earth.) Those two worlds, sealed off from each other, were connected in his vision by the ladder. God's messengers, the angels, were going up and down, connecting the heavenly realm of God with the sleeping Jacob. The message in the dream was confirmed by God's promise to be Jacob's God and to watch over him.

What can connect heaven and earth, God and humanity---especially since human sin has torn the connection so completely? In John 1, Jesus himself recalls Jacob's dream. Jesus is calling his disciples, and Philip wants to introduce his friend Nathanael to Jesus. As Nathanael comes to him, Jesus announces "Here is an Israelite in whom there is no deceit."

Israel . . . that's Jacob's other name, a name God gave him later. Jacob was an Israelite in whom there was lots of deceit. But Nathanael was a straight shooter. If that was all we knew, we'd just have a moral lesson about Nathanael being a better man.

But there's more. Nathanael tells Jesus how great he is: "Rabbi: you are the Son of God." You can almost see the click in Jesus' mind. You think I'm so great because I told you I saw you under the fig tree before you came to me? That's nothing. "Very truly I tell you, you will see 'heaven opened and angels of God ascending and descending' on the Son of Man"---a reference to Jacob's dream.

Jesus is saying, "I am Bethel. I am God's house. I am the ladder between earth and heaven where God and humanity come together." Jesus climbed down Jacob's ladder so we don't have to claw and climb our way up to God.

In order to be the "ladder" between heaven and earth, Jesus needed to be both one of us, and one with God. He must be both human and divine, God and man. That's exactly what the Scriptures teach, and that's how the church came to describe who Jesus is. It's important to note that Jesus isn't half human and half divine but fully and completely human, just like us---but without sin. At the same time he's truly the Son of God, carrying in himself the very divine being. That's the great mystery of incarnation: in this person called Jesus of Nazareth, heaven and earth are bridged; God comes down to us so that we might come to God. He is the mediator (go-between) we need.