Working for the Lord

We’ll continue to use the guidance of the Heidelberg Catechism as we reflect on “Does What I Do Make a Difference?”

Pass It On
Here are some ideas for how you might engage your child in a faith discussion:

Working for the Lord 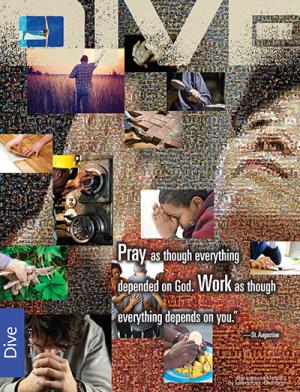 There was a time when Christians would describe a minister or missionary as somebody who was engaged in "full-time kingdom work." The implication was that, instead of entering a "secular" profession, the person had chosen to work to promote God's kingdom. Hopefully, we don't talk that way anymore for a very important reason: we have come to realize that the kingdom of God is much bigger than the church and that we can serve God's kingdom wherever God has placed us.

Throughout the Bible, work is honored as something we dedicate to God. While the fourth commandment emphasizes that we rest from our labors one day a week, the commandment begins with "six days you shall labor and do all your work." Human work can be dull and routine, but it can also be creative, exciting, and deeply satisfying. One way or the other, in our work we are functioning as imagebearers of God, using our own energy and creativity to make something of the world in which God has placed us. Christians are called to serve the Lord and his kingdom in everything they do.

No other biblical writer said more about work than the apostle Paul. Even though he was uniquely called by God to build his church, Paul never gave up his "day job" of making tents. It wasn't that he felt that working full time in the church wasn't enough, or that those who do so shouldn't be paid for their efforts. Paul had practical reasons for not wanting to be financially dependent on those he was bringing into the church of Jesus Christ. Paul may also have enjoyed the respite of working with his hands.

Paul emphasized that the work we do, no matter whether it is dull and routine or exciting and creative, should be done "with all your heart, as working for the Lord" (Col. 3:23). The Lord Jesus Christ claims our entire lives for his service, so we don't just sing hymns or teach church school for the Lord and then wash dishes for ourselves just because we have to.

Paul also emphasized work as a necessity for earning our daily bread. In Thessalonica there were evidently people who considered themselves so spiritually minded that they thought common work was beneath them. Of course, they relied on others to supply their daily needs. Paul's stern response to that particular situation? "The one who is unwilling to work shall not eat" (2Thess. 3:10).

The Lord calls us to be kingdom-centered people in everything we do. We can do that in nearly every sphere of our lives in the world.