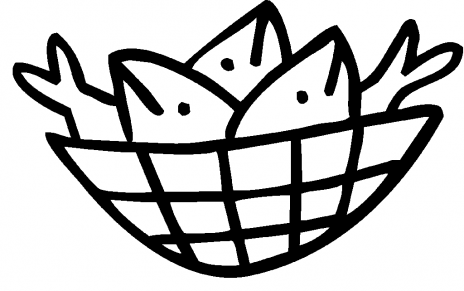 Scripture
Luke 5:1-11
Focus
Jesus called Peter to follow him; he calls us to be his followers too.
Faith Nurture Goals

This story of Simon Peter's call begins a series of lessons on how various people and we ourselves are called to be disciples of Jesus. In Jesus' day there were many rabbis or teachers who taught and interpreted the Scriptures to their disciples. In many ways Jesus fit into that context; he was called a rabbi by some and his followers were his disciples. What was unusual about Jesus is that while most rabbis set up "schools," and prospective disciples might "apply" to be his disciples, Jesus went out and chose his own disciples. And as we will see, the people Jesus chose didn't seem to be the brightest prospects.

Another aspect of the rabbi/disciple relationship is that it involved more than attending class somewhere. The disciple literally followed the rabbi so that he might truly learn the rabbi's way of life. Christian discipleship is following Jesus' way of life: his love and obedience toward the Father, his loving service to others, and his willingness to suffer for the sake of others. Most of all, it's living by the joyful message of the coming kingdom of God.

Jesus began his ministry around where he grew up and lived, the towns and villages around the Sea of Galilee. In this story we meet him on the shores of Galilee with large crowds of people gathered around, so much so that he had to teach from a boat just offshore. It's important to remember that Jesus, though he was crucified, was an extremely popular teacher who attracted mass audiences.

After he taught from the boat and the crowds dispersed, Jesus turned his attention to Simon Peter, a leading fisherman, and gave him some fishing advice. Simon, a bit irritated perhaps at getting advice from a carpenter and rabbi, replies that they've been out there all night (the normal time to fish) and caught nothing. "But if you say so . . ."

Simon's reluctant obedience results in a huge catch---one that took two boats to haul in. Then he stumbles to the shore and falls at Jesus' knees, or clings to them perhaps. "Go away from me, Lord; I am a sinful man!" Obviously Simon felt both awe and fear in the presence of a man of such holy power. Clearly this was, as people sometimes say, "a God thing," and in its light Simon felt his unworthiness and sinfulness.

Jesus responds with an assurance and a challenge. "Don't be afraid; from now on you will fish for people." It's the challenge that grabbed Simon Peter and intrigues us. Fishing for people---what a strange metaphor! Jesus was calling Peter from feeding people with the fish he caught (important as that is) to being involved in the transformation of people's lives with the message of the kingdom of God.

What "hooked" Simon and the other disciples Jesus called was not just chalking up converts but the opportunity to profoundly influence the lives of others for eternity. As a teacher, you also fish for people, and I hope you are hooked by the wonder and joy of having a lasting influence on the life and faith of the children in your group.