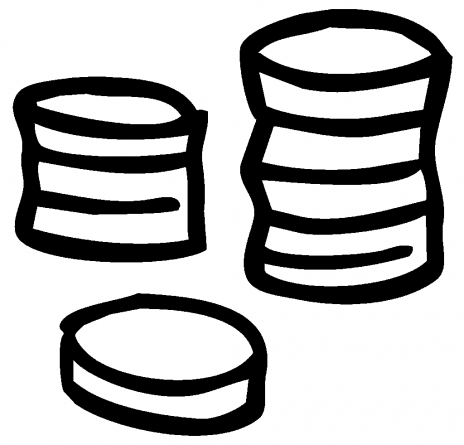 Simon Peter had his problems, but I don't think anyone in Jesus' day would have found it strange for such a man to be one of Jesus' disciples. In this story, Jesus calls a man named Levi, or Matthew, who was very objectionable indeed. And this call was considered so important that three of the four gospels tell about it.

Obviously, tax collectors were not considered good disciple material. Since it would not be a good idea for the occupying Roman army to strong-arm taxes from people, the Romans wisely set up a system in which willing and compliant Jews collected taxes for them. The incentive was that they got to keep a percentage for themselves. They were despised, of course, not just for collecting taxes, but for being collaborators with the hated Romans.

This story isn't just about a tax collector, but also about a group of people called Pharisees and teachers of the law. Just as today there are many denominations in the one church of Christ, each with its own unique understanding of the Bible, in Jesus' day there were several different groups that represented unique ways of understanding and living their Jewish faith. One of them, the Pharisees, insisted that people needed to live according to God's law in order to maintain their distinction as God's covenant people.

While the Pharisees often appear to be the "bad guys" in the gospels, it's important to understand that their tensions with Jesus came more from the fact that Jesus' teaching was closest to theirs. At least they were serious about their faith and how to apply it to their everyday lives. The problem was that in their insistence on following God's law as distinct and holy people, they ignored God's grace, and it was God's grace toward sinners Jesus came to reveal and embody.

To the Pharisees, Romans and all Gentiles were "unclean," and they refused to have anything to do with them. Certainly they believed that the Jews who worked with the Romans, such as tax collectors, had become unclean sinners too. As officially "unclean" persons, tax collectors were forbidden from participating in any formal Jewish faith practices, including temple worship. Pharisees were also forbidden to eat with such people, since table fellowship would bring physical contact and implied acceptance.

You can see why the Pharisees were upset by Jesus' attendance at Matthew's dinner party as the guest of honor. But Jesus was not carousing with these people as though he condoned their sinful activities. He wasn't saying, "Don't pay any attention to those stuffy Pharisees." Instead he was saying, "Follow me." He called Matthew to a new life as his disciple, and that invitation was so compelling and liberating that he threw a party so all his disreputable friends could meet Jesus.

Jesus' answer to the Pharisees' objection is not only a classic piece of logic but a marvelous statement of God's grace. It's sick people who need the doctor's attention, and it's sinners who need Jesus' gracious call to repentance. Matthew's dinner party anticipates another welcoming table, the table of the Lord, where we sinners are all invited to eat and drink his body and blood.