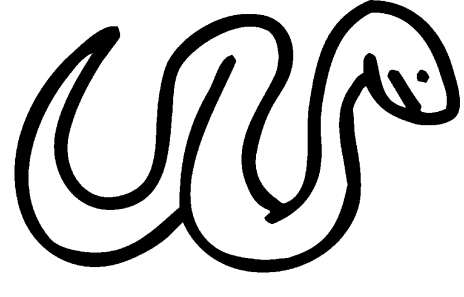 The seeds of this sad story can be found in chapter 2, where God set some boundaries for Adam and Eve on life in the garden. They were prohibited from eating from a certain tree, mysteriously called "the tree of the knowledge of good and evil." Next to it stood the "tree of life," from which they could freely eat.

An odd creature slithers his way into this pristine garden---the serpent. We don't know anything more about the serpent, and he is not designated as Satan here. This story shows us that evil---its origin and its purpose---is very mysterious. The important thing is that the serpent, like Adam and Eve, is another creature.

Note the insinuations the serpent makes about God. He makes the assumption, and passes it on to Adam and Eve, that by prohibiting this one thing, God is holding something back. Instead of just trusting and obeying God, they can be like God, knowing everything like God. Every word the serpent utters seeks to undermine their trust in God's goodness. Finally the fruit just looks too good. They grab it and eat it.

And at that moment the pristine life in God's garden falls apart along with the first recognition of their nakedness. Chapter 2 had made the point that Adam and Eve were naked and not ashamed, but now they felt shame. Nakedness represents transparency and the possibility of evil intent. The big cover-up begins.

Next God saunters into the garden for a daily walk with the beloved couple, and they hide instead of going out to greet him. They are gripped by shame---not only that they have done something wrong, but that *they* are wrong. Something has happened to fundamentally change their place in God's world.

God calls them, and they come slinking out of the bushes. It's judgment time. Adam, Eve, and the serpent are all given words of judgment. Their lives will never be the same. Pain, drudgery, domination, and alienation will now take the place of their carefree life in the garden.

But even as the darkness descends on the garden and Adam and Eve are sent far away, "east of Eden," a ray of hope shines through. The first is that in his words of judgment to the serpent, God promises enmity between the seed of the woman and the seed of the serpent: the serpent will strike the heel of the woman's descendants, but the woman's seed will crush the serpent's head. What might that mean? Then, God looks at Adam and Eve in their hasty cover of fig leaves, and he makes animal skins for them. God covers their naked shame with sturdy clothes as he sends them out of the garden. What might that mean?

This primal story is now called "the Fall." Just as the stories of Genesis 1 and 2 define the glorious possibilities of our life in the world, this story describes what we have become in our sinful rebellion against our creator.