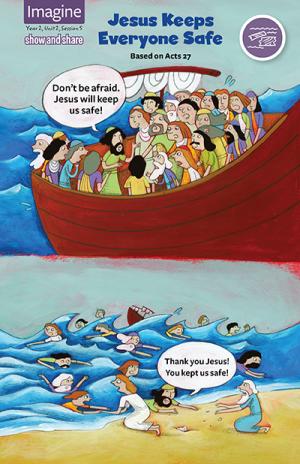 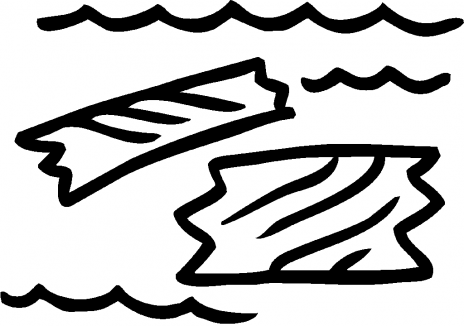 Scripture
Acts 27
Focus
Paul trusted Jesus to care for him and everyone on the ship through the storm.
Faith Nurture Goals
Memory Challenge
Acts 16:31

Today's story reminds us that even though Paul did an enormous amount of travelling, it was a risky thing. The ships in which he sailed were relatively small (about 100 feet or 30 meters), sailing on a vast ocean against contrary winds and sudden violent storms.

Paul is on his way to Rome since he has appealed his case to Caesar. It's interesting to observe the kind of position he had on the ship. Early in the voyage, they were already experiencing tough winds, and Paul advised the centurion in charge to find a safe harbor. After all his journeys, Paul was probably more experienced at sailing the sea than the officer in charge. But the centurion would have none of it.

As they make their way through the Mediterranean, the ship encounters a violent storm with winds of hurricane force. Fearing they would run aground on some shoals, the captain directed the crew to throw the cargo overboard to lighten the ship, and then even the ship's tackle.

Then for days on end they sailed aimlessly, battered by winds and waves, never seeing the sun or the stars. Finally, they gave up all hope of survival. At that point, Paul again speaks to the centurion and the whole crew. Of course, he first does an "I told you so," reminding them of his earlier advice, but then he goes on to encourage them. "Last night an angel of the God to whom I belong and whom I serve . . . said, 'Do not be afraid, Paul. You must stand trial before Caesar; and God has graciously given you the lives of all who sail with you.'"

After two weeks of this ceaseless pounding, the ship approached land, and while the sailors did everything they could, the ship headed for the rocks. Some sailors connived to get away on a lifeboat, but Paul warned the centurion that all must stay on board to be saved. Essentially, Paul appeared to be in charge at this critical point. After a final stirring speech of encouragement from Paul, the ship began to break apart on the rocks. All aboard swam toward shore, or grabbed whatever broken pieces of the ship they could. Just as Paul predicted, every soul aboard that ship was saved.

Ultimately this is not a story about a heroic Paul, though it's hard not to admire his steadfast faith and courage in the face of such trials. It's about God, who will accomplish his purposes no matter what the obstacles---a God who mercifully saves others along with his chosen instrument, Paul.