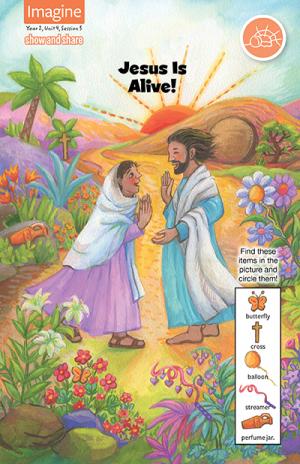 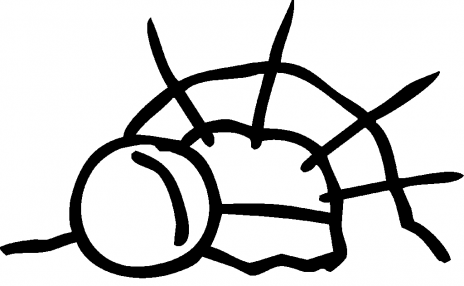 Scripture
John 20:1-18; Acts 1:1-9
Focus
Jesus is alive again and will always be with us.
Faith Nurture Goals
Memory Challenge
Mark 5:36b

The unique perspective of John's gospel continues in the narrative of the resurrection. It begins quietly with Mary Madgalene's approach to the tomb, builds with the footrace of the two disciples to the tomb, then Mary's dramatic encounter with Jesus, and climaxes with Jesus' appearance to the disciples in the upper room.

According to John, Mary Magdalene is the first at the tomb, and seeing the stone rolled away, she runs back to the disciples with the starting news: "They have taken the Lord out of the tomb, and we don't know where they have put him!"

This leads to a footrace between Peter and John (the "one Jesus loved") to see what was going on. Reading carefully, you can see what the writer is getting at. The "other disciple" gets there first and just peers inside, seeing the strips of burial cloth. Peter then arrives and, as is typical of Peter, he rushes right in. In addition to the burial cloths, he sees the distinctive head cloth in a separate place. Peter rushes off, and now the other disciple goes in for a closer look. He puts two and two together, and "he saw and believed." He is, according to this gospel, the first believer in the resurrection.

Mary comes back, stands outside the tomb, and weeps. When she looks inside she sees two angels, who ask her why she's crying. Mary rather matter-of-factly tells them the same story: "They have taken my Lord away." Does she recognize they are angels? Probably not, since when Jesus himself arrives, she mistakes him for the gardener.

Finally, Jesus utters just one word, her name, "Mary." At that she understands, believes, and cries out in her native tongue, "Rabboni!" ("Teacher!"). If the "other disciple" is the first to believe, Mary is the first to actually see the risen Lord, and she gets to tell the others that he is risen.

But before she does so, we are party to a touching scene. Mary, once she recognizes the Lord, naturally wants to reach out and embrace him. After all he's been through, he's alive! Lovingly, and firmly, Jesus puts out his hand to hold her back. "Do not hold on to me," he tells her. It's not because she's unworthy or because it's somehow wrong. He explains, "For I have not yet ascended to the Father. Go instead to my brothers and tell them, 'I am ascending to my Father and your Father, to my God and your God.'"

What does that mean? First, Jesus is telling her and the others that their relationship is now changed. He will no longer be among them as before. He is ascending now, and in that is a new and different relationship. But he also assures them that he is going to "my Father and your Father, to my God and your God." Jesus, by his death and resurrection, has opened the way to the Father. He is now truly our Father and our God.

Mary rushes back to the locked upper room and its fearful disciples. "I have seen the Lord!" she announces.

As believers we meet to worship each Sunday because that is the day of the week that Jesus rose from the dead. So every worship gathering is really a resurrection festival and a celebration of the wondrous new life we have in our Lord. That’s why it’s not at all out of place at this time of year for you to be telling kids the story of Jesus’ coming back to life and going to be with God.