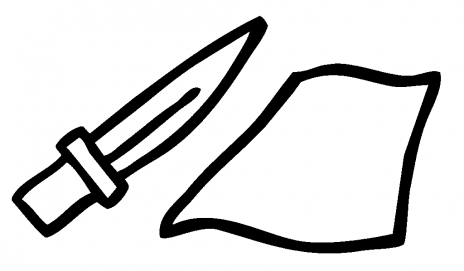 This session displays an aspect of David's life we seldom look at. During this period David is an outlaw and a fugitive. He and his friends seem like a pack of wild animals, running and hiding from a band of ruthless hunters.

Saul's jealousy and hatred for David are now out in the open for all Israel to see. Anyone who, like the priests of the Nob, does anything to assist David is going to face Saul's vengeful sword (1 Sam. 22:6-19). The people are forced to choose---they're either for Saul or for David. And Saul is king, with all the power, the soldiers, and the authority of his position. The only reason David survives is because "the Lord was with David" (1 Sam. 18:12).

First Samuel 24 tells how Saul, with three thousand men, has come looking for David in the desert of En Gedi. Saul goes into a cave to relieve himself. Deep inside the cave, David and his men are hiding. "What a wonderful chance," David's men whisper. "Here is your enemy---by himself and helpless. All you need to do is creep up and cut his throat. God must have given you this chance. Take it!"

What a temptation! How easy it would have been to take his future into his own hands, to kill Saul and agree with his men that God had made this possible (1 Sam. 24:4). David even goes so far as to creep up on Saul and cut off a corner of his robe with his knife. Saul is completely unaware of what David has done; he could just as easily have used the knife to cut Saul's throat.

Why didn't David kill Saul? David was conscience-stricken that he had even performed a symbolic act of violence against Saul by cutting off part of his robe. David listens to his conscience. He understands this is a warning from God not to touch the king whom the Lord has anointed and appointed. David is not to take the throne by violence but to receive it as a gift from God.

The anointing of Saul is a sign of authority given by God. It's important for the children to recognize that the authority of a king, a president or prime minister, a judge, the police, their teachers, and their parents comes from God (Rom. 13:1). Everyone, adults as well as children, needs to recognize that authority as God's gift for our well-being.

Of course, those in authority do not always exercise it according to God's will. Such was the case with Saul. Nevertheless, David deeply believed that it was up to God to bring judgment upon Saul.

In this story David teaches us another essential quality of a good king. A good king is someone who listens to God and who loves God's law. A good monarch realizes that authority is God-given and that he or she is responsible to God for its use. That's where Saul failed and David succeeded.

This story has a number of lessons: about listening to our conscience but respecting those in authority, about not using violence to solve problems. But the deepest lesson is learning to trust God by doing things God's way.

Before the children arrive, write the following riddle on board or newsprint. Cover all the clues and the answer (with a piece of newsprint) so that all the children see when they enter is the riddle question: Who are they?