The Birth of John the Baptist

Like us, kids are busy. Their lives are filled with split-second images, fast food dinners, quick conversations, and extracurricular competitions. This year we’re going to give kids less noise and more time to experience God as we dwell in God’s Word together each week. Your child’s group is called “Wonder”—every time we meet we’ll be entering one of God’s stories, and then living into and out of it together. For the next six weeks we’ll be learning stories about the events leading up to and including Jesus’ birth, as well as his early years on earth.

Each week your child will bring home a Show and Share paper designed to help kids show and share what they’ve learned at church with you at home. Every story we learn has a story symbol that will help your child recall the story and see it as one part of God’s big story. You’ll find that story symbol on the Show and Share papers and also inside the God’s Big Story cards you can use each day at home. (Need a set of God’s Big Story cards? They can be purchased from FaithAliveResources.org)

In addition to singing songs of praise, we’re going to be learning verses from Scripture by singing them! (You may purchase your own copy of DwellSongs or download individual songs on the Leader Support page of DwellCurriculum.org—just ask me for the titles!)

We’re excited to begin a new year of children’s ministry and can’t wait to begin this faith journey with you and your child! Please contact us if you have any questions.

The Birth of John the Baptist 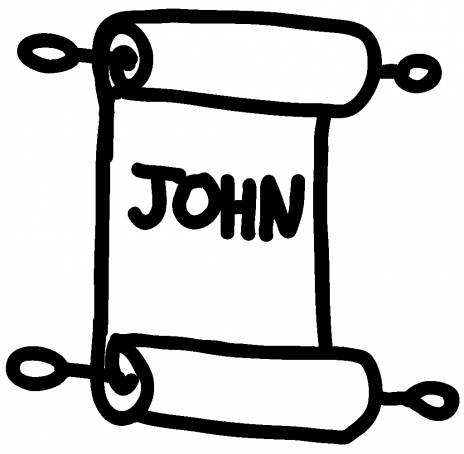 So often in the Bible, when God inaugurates a new era of his saving activity, look for a dead end situation (barrenness) and a surprise baby. Abraham and Sarah, Hannah, and now Zechariah and Elizabeth, all "barren" couples (of course the woman was blamed), were promised a surprise baby despite their doubts.

Here in Luke 1, God's biggest saving act of all is about to happen with the gift of his Son. God wants someone to prepare the way by stirring up a sense of need and fostering a renewed hope. So an angel visits old, childless Zechariah in a very strange place.

Luke paints a vivid scene of Israel's life and worship. Zechariah is one of a cohort of priests who were chosen by lot (only once in a lifetime) for the daily sacrifice of incense in the temple at Jerusalem (the sweet-smelling smoke of the incense symbolized the people's prayers ascending to God's throne). The chosen priest placed incense on glowing coals and prostrated himself before the altar in prayer. When the people outside saw and smelled the smoke from the incense, they prayed, "May the merciful God enter the Holy Place and accept with favor the offering of his people."

In the middle of this solemn act, an angel appeared and spoke to Zechariah about a special promised child who would "make ready a people prepared for the Lord." Perhaps feeling annoyed at the interruption, Zechariah expressed his understandable doubts. To which the angel responded with a strange sign: Zechariah went mute.

He was expected to emerge from the temple with a word of blessing for the gathered people, and, as Zechariah was delayed by this bizarre conversation, the crowd grew restless. Finally he stood there helplessly gesticulating without a word to say. (I think we're meant to at least smile at the scene.)

Zechariah goes home. Although Elizabeth, his wife, begins to bulge with pregnancy, Zechariah remains wordless until he fulfills the words of the angel and indicates the child's name will be John (meaning God's gracious gift).

Luke makes it clear that God's startling new thing isn't brand-new, but is woven into the fabric of Israel's history and worship. The old and the new fit snugly side by side.

This story has the seemingly contradictory elements of surprise and preparation. No doubt Zechariah and Elizabeth are surprised by the angel's announcement. On the other hand, God doesn't just plunk Jesus down into the world. He prepares the way with John. He makes sure the world and his own people are as ready as they can be for the most surprising intervention of all.