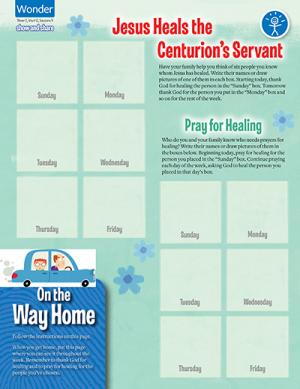 Today we have another story about healing and faith. This time the faith is not that of the person being healed, the servant, but the faith of his master, a centurion. It's faith on behalf of others, the kind of faith we express when we pray for others.

The Bible doesn't tell us whether the servant knew anything about Jesus, but the centurion certainly did. He's a very interesting figure in this story. His relationship with some of the leaders of the Jews must have been unusual, since those leaders held the centurion in high respect.

It's very likely that this centurion was what we call a seeker, but in those days was called a proselyte or "a righteous Gentile." Perhaps he had commanded Roman troops in Israel for a fairly long time and had become attracted to the Jewish religion and engaged in various Jewish religious practices. But he was not fully recognized as a Jew, and he was kept at the fringes of the Jewish community.

Still, the Jews were deeply indebted to him since it must have been a blessing to have a friend in such a high position. They convinced Jesus of the worthiness of this man.

Now, the amazing part. The centurion sent some friends to urge Jesus not to come to his house, but only to speak a word of healing from a distance. As a proselyte the centurion understood that a rabbi might hesitate to enter the house of a Gentile, even a righteous one.

In those days doctors and healers tended to indulge in a lot of hocus-pocus. Their quasi-magical actions were intended to impress the patients and increase the fees. The centurion sensed that Jesus was a different kind of healer. He recognized Jesus' tremendous power and authority, believing that he could heal his servant at a distance. His approach to Jesus was utterly humble and respectful.

It's clear that Jesus was genuinely amazed. There only a few cases in the Gospels where Jesus praises someone's faith, and in almost every case that person is a Gentile. As Jesus ironically points out, "I tell you, I have not found such great faith even in Israel."

A story of great faith can be both very encouraging and troubling. It's encouraging because we see how Jesus responds to faith. He's drawn to it and wants to do what the person trusts him to do. It's troubling because we sometimes wonder whether we have enough faith. In those times we can remember the words of another centurion: "I do believe; help me overcome my unbelief!" (Mark 9:24).

Today’s session adds another layer to the wonders of God’s healing power. You and your group will marvel at Jesus’ ability to heal without physically seeing or touching a very sick man. What comforting news! It’s another affirmation that Jesus has the power to heal us too!