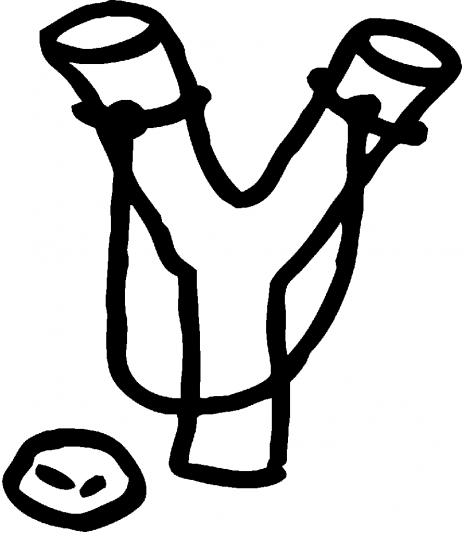 Yes, you've been eager to tell this story. And why not? No matter how many times we've heard it, the courage, suspense, and adventure grab us anew with every encounter. But don't miss the even more exciting and deeper story of faith that underlies it all.

Just before this story begins, in 1 Samuel 16, we learn that "the Spirit of the Lord had departed from Saul." When the leader is "Spiritless," all of their followers will become dispirited as well. Mighty King Saul is camped on one side of the Valley of Elah, with the Philistines on the other. The valley between is a no-man's land, because the giant Goliath has challenged Israel to settle the battle one on one: "This day I defy the armies of Israel. Give me a man and let us fight each other." The whole army of Israel, from Saul down to the lowliest foot soldier, cowers in fear.

Along comes David. His older brothers are all in the army of Saul, but David was evidently deemed too young and inexperienced to serve in this way. Instead he brings sandwiches to his soldier brothers. While he is there Goliath bellows out his usual challenge. Interestingly, David is not only interested in the reputation of the God of Israel but in his own advancement. "What will be done with the man who kills the Philistine....? Then he expresses his scorn for Goliath: "Who does he think he is 'that he should defy the armies of the living God'?" The Bible is honest about people. David isn't all courage and pious talk; he also wants to get ahead---he's got ambition, which is quite possibly another factor that makes him a "man after God's heart" (vs. 18).

David's defiance gets him an audience with the king himself, who is both astounded and skeptical that this mere boy might even consider going against Goliath. But David convinces Saul to at least give him a chance. "Go," the king responds, "and the Lord be with you." (Unable to catch Saul's verbal inflection, we wonder whether this reply was an expression of faith or of desperation.) Next we see David stumbling out of the camp under the weight of Saul's full armor, looking ridiculous and feeling hampered and useless.

As soon as he gets far enough away from the Israelite camp, David dumps down the armor, takes his staff in hand, stoops to choose five smooth stones from a brook nearby, and sets off to meet Goliath armed with what the giant had mockingly referred to as sticks and stones. The fact that David is so young, so small, and so ill-equipped seems to enrage Goliath all the more. But David only grows in faith and courage. To his credit, he identifies and names his true champion---it isn't himself but "the God of the armies of Israel, whom you have defied." Now we know what this is really all about, the reputation of God's covenant name and the well-being of his people.

David's very lack of the typical accoutrements of battle makes clear the real point: "it is not by sword or spear that the Lord saves; for the battle is the Lord's...."

This was a clear-cut case of faith in God, combined with stealth, cunning, and skill. David snuck up on Goliath, who, we might conjecture, hadn't seen the slingshot but only the staff. With a practiced shepherd's skill, David swirled the slingshot, let the stone fly, and landed it right on Goliath's exposed head. Goliath dropped dead on the spot, "face down on the ground"---the attitude of slavery. Ironically Goliath, who had vowed to make slaves of the Israelites, now lies face down before this kid, this spunky shepherd boy. David takes Goliath's enormous sword and slices off the giant's head.

As God's story continues we will hear a lot more about David. It isn't all positive, to be sure. An unfaithful husband and less than exemplary father, David will fail. But, the Bible seems to tell us, David, with his qualities of greatness, is the best that we as human beings can expect. Until the Son of David comes along, who will give humanity a whole new start, wrestling with the powers of hell on the cross.