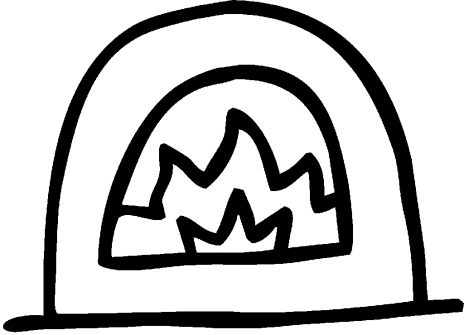 The scene is the plain of Dura in Babylon where the Israelites are in exile. King Nebuchadnezzar has constructed an idol of gold ninety feet high and nine feet wide. Whether this image is meant to represent the king himself or some Babylonian god we are not told. Clearly, it is an idol.

This may have been a political as well as religious move. As a conquering monarch, Nebuchadnezzar is trying to unify his diverse people by forcing them to worship one god. So all of the officials who rule in Nebuchadnezzar's empire are required, on pain of death in a fiery furnace, to bow down and worship this idol.

The repetition of the list of officials and of the instruments calling the people to bow down gives us a feeling for the great formality of this occasion. But it also seems to be a way in which the Jewish author is making fun of these idol worshipers. What a contrast to the holy and constrained way of worshiping the God of Israel! The dramatic cranking up of the heat of the furnace and the deaths of the soldiers near it may also be meant to ridicule Nebuchadnezzar's idea that an even hotter furnace could be more destructive.

Daniel's three friends, Shadrach, Meshach, and Abednego, refused to bow at the scheduled time of prayer, and some jealous Babylonians denounced them to the king. They were probably very unhappy that the young Israelites had been placed in such important positions. The angry king emphasized their helplessness, believing that no God could possibly rescue them. The response of the three young men is worth careful attention. They say, in effect, that God is able to save them. Whether God is willing to do so, they don't know. But even if the answer is no, they still will not bow down before the king's image of gold. These young men show great courage combined with keen insight.

Their refusal to obey made the king even angrier. Tied hand and foot, the three were thrown into the middle of the raging furnace. To the king's amazement, they seemed to be walking freely around inside the fire, completely unharmed. Astoundingly, a fourth person, the angel of God, appeared to be with them, protecting them from harm.

At this awesome sight, Nebuchadnezzar leaped to his feet and shouted into the furnace, "Shadrach, Meshach, and Abednego, servants of the Most High God, come out! Come here!" When the young men stood before him completely unharmed, Nebuchadnezzar offered his praise to their God and his admiration to the three young men. "They trusted in [God] and defied the king's command and were willing to give up their lives rather than serve or worship any god except their own God" (3:28).

Nebuchadnezzar then commanded that no one say anything against the God of Shadrach, Meshach, and Abednego. This probably protected them and their fellow Jews in Babylon. And the three young men were promoted to positions of even higher authority and responsibility.