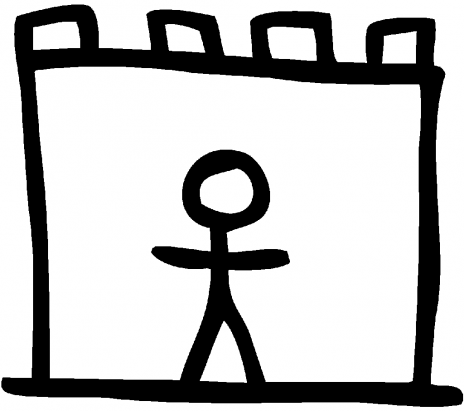 This is one of the strangest chapters in the Bible---a testimony, offered by the great king Nebuchadnezzar, to the greatness of the God of Israel. But if God can reveal himself through an ass, a dream, and his own Son, he can reveal his truth through a foreign monarch.

It begins, "King Nebuchadnezzar: To the nations and peoples of every language, who live in all the earth." It can't get more universal than that! Strangely enough, the story Nebuchadnezzar tells ends up testifying to his own pride and humiliation before the Lord, the God of Israel.

It begins with the king "contented and prosperous," which sounds very much like the rich man in Jesus' parable (Luke 12:16-21) who contentedly planned to build bigger barns and take it easy. But when Nebuchadnezzar lay on his bed to sleep the sleep of contentment, he found his thoughts disturbed by a dream and wanted to know what it meant.

Nebuchadnezzar summons wise men, magicians, enchanters, and astrologers to help him, but they are unsuccessful in interpreting the dream. So the king summons Daniel to reveal the mystery. The dream consisted of a large tree that "touched the sky" and provided shelter for all the birds and animals. But along came a heavenly messenger with the command to cut it down, strangely: binding the stump and roots with iron, lying in the grass of the field.

The heavenly messenger announces the verdict that the "real tree" must now be changed from human to animal, living the life of a wild animal for seven years.

Daniel ponders the dream, and then, understanding its dark message, shrinks from it in fear. The king sees what is happening and encourages Daniel to be honest. Daniel (also called Belteshazzar) swallows hard and reveals the meaning of the king's dream: "If only the dream applied to your enemies!" (4:19). The tree, of course, represents the king himself in all his accomplishments and pride. God has decreed that he shall be humbled for a time in order that he might acknowledge the true king of the world, the Most High God.

Nebuchadnezzar will lose his mind and be driven out to live with and like the animals in the field for a period of seven years. But, just as the stump and roots in the dream remain, the king will eventually be restored to power. Daniel takes the opportunity to invite the king to repent of his sins and be spared, saying, "It may be that then your prosperity will continue" (v. 27).

All this was evidently forgotten when, a year later, Nebuchadnezzar was walking on the walls of Babylon, speaking pridefully of all he had built and of all his great accomplishments. No sooner were the words on his lips than the dream was fulfilled. The king went out of his right mind and was driven out to be with the animals in the field, growing hair like feathers and nails like the claws of a bird.

Then, after the specified time, he was restored to his right mind, and he gave praise to God. "His dominion is an eternal dominion; his kingdom endures from generation to generation" (v. 34).

We can imagine the impact this story has on the exiles of Israel in Babylon and on future generations who live under the thumb of some occupying power. Even the greatest and most powerful kings are under the authority of the Lord God of Israel. God may punish his people for their sinfulness, but the agents of that punishment are under his authority as well.