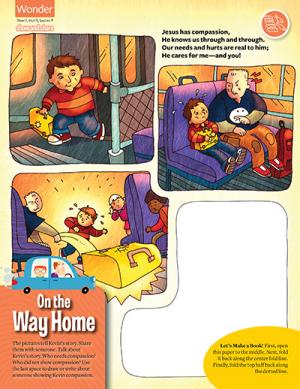 Last week we saw Jesus at the wedding feast at Cana, miraculously providing wine so the feast could go on. Here is another story of miraculous feasting as Jesus feeds the four thousand on the mountainside.

It's always important to look at the basics first. Matthew makes a big point of where this event takes place. It's along the Sea of Galilee, on a mountain. That immediately hints at two important aspects of the story to follow.

In Matthew, Galilee is the place where Gentiles lived. Not that there weren't any Jews there, but right from the start (4:12-16) it's "Galilee of the Gentiles." In this case Jesus had just come from the region of Tyre and Sidon, where he had healed a Canaanite woman. Here he's also among Gentiles, since, on seeing his healing miracles, the people praise "the God of Israel." Right from the start, with the visit of the Magi, Matthew makes clear that this Savior is for the whole world.

The second aspect of this place is that Jesus "went up on a mountainside," and there he fed the people. For Matthew Jesus is the second Moses. He went down to Egypt under threat and came back. In the Sermon on the Mount he taught on a mountainside and reinterpreted the Law of Moses. Here the new Moses goes on a mountain in a "remote place" to pray and then to heal and feed the people, just as God fed his people through Moses in the wilderness.

It says that Jesus went off to be alone, but, as often happened, he was accosted by "great crowds." He healed many of them, and he noticed when they lingered too long and their food began to run low. Here we see the heart of Jesus, and through him, the heart of the Father who sent him---"I have compassion for these people." These needy people with their diseases and their vulnerability, their hurting and their hunger, touch him deeply.

We can never emphasize that compassion enough---the compassion of God expressed in Jesus. It's what gives us the courage of persistent prayer, the hope that God listens to our cries and will make things right.

Of course, the disciples don't have a clue, even though they've seen Jesus feed an even larger crowd not long before. "It's a remote place, and we don't have enough" is all the compassion and faith they can muster.

Watch Jesus closely as he feeds the crowd, and especially notice the verbs. He took the bread, he gave thanks or blessed it, and he broke it and gave it to them. This is the exact sequence of verbs that appears when Jesus offers the bread as his body at the last Supper. It's almost the exact sequence whenever the Supper is described. So this meal in the wilderness was meant to foreshadow the Supper of our Lord we still celebrate today. And this is no skimpy meal; it's a feast in the wilderness. "They all ate, and were satisfied." Seven basketfuls of leftovers testify to its abundance.

It's a miracle, but, like turning water into wine, this sign points beyond itself to the great feast when God will gather all his people from north and south and east and west into the kingdom of God.

Welcome kids warmly, using their names and giving them a handshake, a high-five, a pat on the back, or a wink to vary your routine a bit.